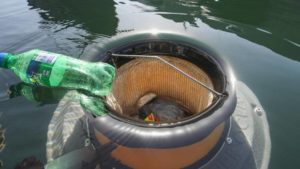 When two Aussie surfers made the decision to quit their jobs and tackle one of the biggest environmental problems facing the modern world, they never dreamt they would be in the position they are today.

Perth locals Pete Ceglinski and Andrew Turton were so sick of seeing a massive amount of rubbish floating around in the ocean they decided to dedicate their lives to help fix it.

In 2015 they came up with a prototype for the Seabin, which works by sucking rubbish from the water and catching it in a filter system.

“We came up with the idea with the very lateral thought of if we have rubbish bins on the land, why don’t we put them in the water. So we did that,” Mr Ceglinski, CEO and co-founder of the Seabin Project says. “It is basically a floating rubbish bin. We have a submersible water pump at the bottom, we bring water from the top, we pump it out the bottom and in the middle we catch it with a filter.”

Their invention quickly gained international attention, with a crowd-funding campaign for the prototype raising over $300,000 in two months.

The Aussie surfers were left gobsmacked by the “mental” reaction they received after their campaign video went viral. “Today we have over a billion views and shares. It’s just gone nuts,” he said.

Dozens of countries now have Seabins installed to help clean up their waterways, with the organisation being bombarded with an increasing number of orders from all over the world.

Between 10 and 20 million tons of plastic end up in our oceans each year and by 2050 it is estimated there will be more plastic in the ocean than fish, according to Worldwatch Institute.

A growing number of councils across Australia are recognising the importance of this invention and the huge community support means they are being installed at an impressive rate. A single bin can hold up to 20kg of debris and costs less than one dollar a day to run.

Mr Ceglinski estimated the one in Sydney would need to be emptied once every couple of days, but said in some locations around the world the bag had to be changed up to five times day.

“The most common things we catch are micro plastics, followed by food wrappers and cigarette butts,” Mr Ceglinski said.

The Seabin team also works closely with marine scientists to ensure the invention doesn’t negatively impact marine animals. “Every now and then we do catch some bait fish but because the Seabin filter is still in the water they are still alive when we find them and we can throw them back,” Mr Ceglinski said. “To lower this risk we have been working with marine scientists who have assured us that the trade-off of this verses catching all this contaminated plastic is worth it.”